Tomoko is always searching for and creating inspirational new desserts. With her superior technical knowledge and experience, she adds a touch of uniqueness and originality to traditional desserts that is both European and Japanese. This is apparent in both her desserts and creative breads.Her exquisite senses of taste, flavor and textures, added with her passion for her products, elevates the ordinary desserts and breads into a higher artistic level. Both her desserts and breads are a “must have” for any serious food connoisseur.

She has trained at culinary schools both here and in Japan, particularly specializing in traditional French pastries and desserts. Later, she worked and trained at well-established places in New York such as Bouley, Le Bernadin and Russian Tea Room.

She was responsible for setting up Cha An, a Japanese tea house and sweets shop in 2003, and was the executive chef throughout her tenure.
She resigned in July of 2012 to start working on a project to set up her own café and pastry shop in Brooklyn. She wants to create her own style of desserts and breads that combines the best of the cultures of her two favorite countries, Japan and America. 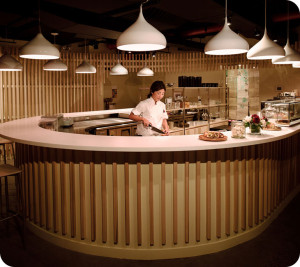